Low interest rates on bank fixed deposits, small saving schemes, and fastening retail inflation has been a rather disappointing picture for a large section of investors. Gold too after peaking in August last year lost its sheen.

Graph 1: Lacklustre performance of gold on a YTD basis 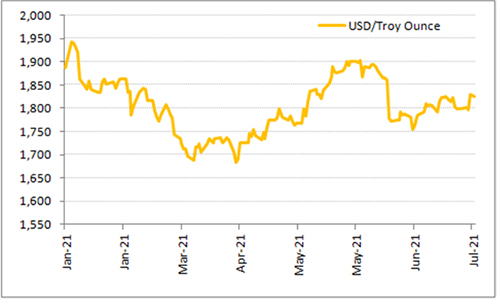 In the U.S. Dollar (USD) terms as well, gold prices fell through the Q1CY21 and then rebounded remarkably in Q2CY21 before losing momentum again. On a year-to-date basis, gold in USD terms has lost -3.7% as of August 2, 2021, and in all major currencies of the world as well, it generated negative returns.

What is keeping the pressure on gold prices?

Equity markets in India and other major economies have been upbeat supported by liquidity and greater retail participation. The accommodative monetary policy actions and stance major central banks of the world have taken to support growth amidst the COVID-19 pandemic together with unappealing interest rates offered on fixed-income instruments has led to a period of risk-on.

Investors are participating in a buzzing IPO market in India (as indicated by the oversubscription of many IPOs and high grey market premiums) hoping to make some handsome listing gains, plus investing actively in the secondary market despite expensive valuations.

As per the economic outlook report released by International Monetary Fund (IMF) in July 2021, the world economy is estimated to grow 6% in 2021 and 4.9% in 2022. Emerging markets are likely to do better than the developed markets. India, according to the IMF, is expected to grow at 9.5% in the fiscal year ending March 2022.

Similarly, the World Bank, the Reserve Bank of India (RBI), and the Asian Development Bank have projected India to grow 8.3%, 9.5%, and 10%, respectively. International rating agencies such as Moody’s, S&P Global, and Fitch have pencilled 9.3%, 9.5%, and 10% GDP growth, respectively, for India.

While many growth forecasts have been revised downwards because of the pandemic, things are looking up, going by certain high-frequency indicators — which have reached the pre-pandemic level and depicting a V-shaped pattern.

As India vaccinates more citizens with the first and second dose, restrictions will be eased, which would then accelerate economic growth further with the revival in consumer sentiments. At present, nearly 27% of India’s population has received at least one dose of the COVID-19 vaccine as of August 2, 2021, while this proportion has been well above 60% in the developed world.

With major economies in the developed countries, such as the U.S. and U.K, expected to show a strong recovery post-pandemic, the growth outlook for the world economy remains strong. Gold in such times is likely to look pale. Mind you, encouraging economic growth and gold do not go hand-in-hand.

In the U.S., President Biden’s infrastructure bill is currently awaiting a go-ahead by the senate at present. If approved, the infrastructure plan is likely to create on average 2 million good-paying jobs per year over the next decade. The proposed infrastructure investments amounting to USD 1 trillion by the U.S. government, apart from boosting the job market, is also expected to pare the debt.

The U.S. Dollar Index has also managed to stay above the crucial level of 90 despite the inflationary pressures in the world, thereby suggesting the strength of the dollar against the basket of some of the world’s most prominent currencies.

The net inflows into gold Exchange Traded Funds has remained negative on a YTD basis (USD -6,797.2 million), despite having turned positive in Q2 to USD 2,546.6 million.

Thus, the trend suggests that investors aren’t convinced about investing in gold in 2021 yet.

The factors that would decide the future course for gold are…

Despite this, the U.S. Federal Reserve has sounded more accommodative than hawkish in recent times. It has decided to look through the higher inflation for now by tweaking policy objectives. Instead of the absolute inflation target of 2%, now it wants to attain the ‘average’ CPI inflation of 2% over the longer term – expecting inflation to be well-anchored around those levels — while seeking to achieve maximum employment.

“With progress on vaccinations and strong policy support, indicators of economic activity and employment have continued to strengthen. The sectors most adversely affected by the pandemic have shown improvement but have not fully recovered. Inflation has risen, largely reflecting transitory factors. Overall, financial conditions remain accommodative in part reflecting policy measures to support the economy and the flow of credit to U.S. households and businesses. The path of the economy continues to depend on the course of the virus. Progress on vaccinations will likely continue to reduce the effects of the public health crisis on the economy, but risks to the economic outlook remain.” – read the statement dated July 28, 2021, released by the Federal Open Market Committee.

The same statement also mentions, “The Committee would be prepared to adjust the stance of monetary policy as appropriate if risks emerge that could impede the attainment of the Committee’s goals.”

In other words, the Federal Reserve may revisit its policy stance, including the bond-buying program if the inflation slips out of its comfort zone and the economy continues to expand.

Note that any downward revision in the bond-buying will have a negative impact on the price of the precious yellow metal. Gold might start its downward journey much before Federal Reserve announces its first rate hike for the cycle.

Interest rates will likely remain a key driver for gold in the short and medium-term. Yet, the negative impact that higher rates could bring will likely be offset by the longer-lasting effects and unintended consequences of expansionary monetary and fiscal policies created to support the global economy. These may include inflation, currency debasement, and higher exposure to risk-on assets in portfolios. Combined with attractive entry levels, these factors could prompt strategic investors to add gold to their allocation strategies and support central bank demand during the second half of the year. However, while consumers may also benefit from the economic recovery and recent price pullback, new COVID variants may limit uptake in gold jewellery in key markets.

So, gold prices are likely to be propped by a few factors. This includes the potential economic uncertainty caused by the spread of the Delta variant. Although, U.S. Federal Reserve Chief, Jerome Powell, has nearly ruled out any ‘significant’ impact of the Delta variant on the economic recovery; in the developing world, the scenario could be different because the pace of vaccination is slow and the healthcare infrastructure is already constrained.

Furthermore, if the global economy fails to grow on the expected lines and supply chain disruptions continue to push the inflation upwards, gold may bounce back. Currently, certain central banks assessing the macroeconomic situation are buying gold and maintaining healthy gold reserves amidst times of the COVID-19 pandemic.

Should you buy gold at current levels?

Remember, not all asset classes will deliver handsome returns year after year. Some have their period of underperformance.

Graph 2: Gold has proved its worth as an effective portfolio diversifier 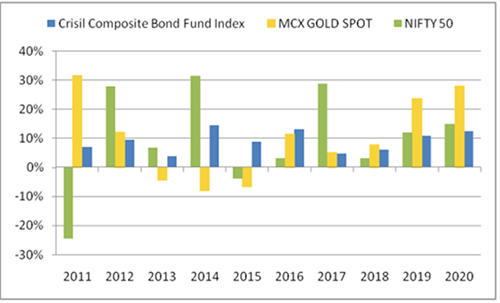 It makes sense to approach gold strategically in 2021 by allocating around 10% to 15% of your entire investment portfolio to gold and with a long-term investment horizon. This would be a smart and sensible thing to do.

The long-term secular uptrend exhibited by gold is something that you cannot ignore and highlights the importance of owning gold in the portfolio as a diversifier.

Historically, gold has often rallied in periods of high inflation and when uncertainty prevails. Thus, tactically owning gold in the form of Gold ETFs, Gold Savings Funds, and/or Sovereign Gold Bonds will help you diversify your investment portfolio. Moreover, it would serve as a hedge (when other asset classes fail to post alluring returns), and command a store of value in times of economic uncertainties. Note that, unlike financial assets, gold is a real asset, and hence make it a point to strategically own some gold in your portfolio. That said, don’t expect double-digit returns from gold in the calendar year 2021.