Will this Landmark Verdict Prevent Fiascos like Franklin Templeton?

Amid this, a landmark verdict by the Supreme Court has provided some relief. The apex court recently held that the mutual fund trustees should seek consent of the unitholders in the event of winding up a mutual fund scheme.

SEBI regulation states that a mutual fund scheme may be wound up if:

Franklin Templeton mutual fund had exercised the first option when it wound of six of its debt schemes in April 2020. The schemes in the process of winding up are:

The fund house cited the liquidity crunch arising due to the pandemic as the reason behind the closure of schemes. Though Franklin Templeton mutual fund said the decision was taken in the best interest of the unitholders, the decision left its investors in the lurch as they could not access their own money. It has distributed Rs 21,080 crore in 5 tranches till now. However, the full recovery is still a while away. SBI Funds Management is the official liquidator of the six debt funds. 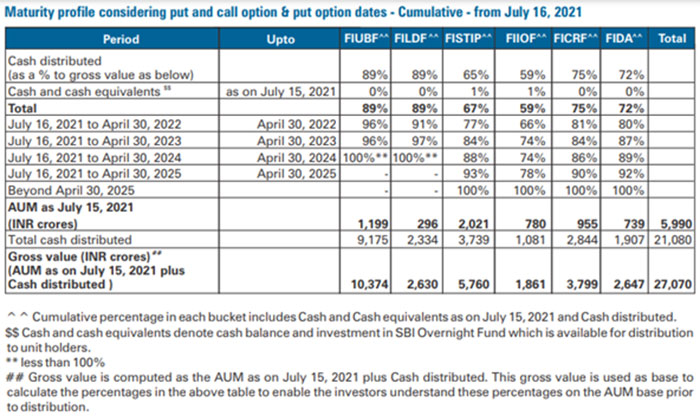 The judges stated that denying unitholders a say weakens their role and right to participate. Unitholders exercise informed choice and discretion when they invest in or redeem the units. Therefore, trustees should envision them as perceptive and prudent, and be transparent about statement, reports, etc. This will enable investors to take conscious decisions.

The judges further remarked that unitholders should not be placid onlookers, impuissant and helpless when the trustees decide to wind up the scheme in which they have invested. Subsequently, unitholders have the right to veto and overrule the decision of domain experts (trustees).

In addition, they asserted that the stature and rights of the unitholders can co-exist with the expertise of the trustees and should not be diluted because the trustees owe a fiduciary duty to them.

Explaining the Regulations 39 to 42 of the SEBI Act that pertains to the manner and procedure of winding up of a scheme, the Supreme Court order stated the following:

The trustees have to give a notice explaining the circumstances that led to the winding up of the scheme to SEBI. They also have to publish the notice in two daily newspapers having circulation all over India, and a vernacular newspaper having circulation at the place where the mutual fund is located.

The Supreme Court has held that the scheme should seek the consent of the unitholders after the publication of the notice and disclosure of the reasons for winding up.

The court’s order was in response to a contention raised by an appellant about the constitutional validity of SEBI regulations. Some of the contentions raised by the appellant are as follows:

a) The matter of concern is section 39(2) of SEBI Act which gives trustees the power to take decision about the winding up a scheme. According to the appellant it gives unbridled power to the trustees.

b) In comparison, vide clause (c) to Regulation 39(2), SEBI has been invested with the power to issue directions for winding up a mutual fund scheme only when it is in the interest of the unitholders. It cannot examine and set aside the decision of the trustees.

c) There is no provision for appeal or internal challenge against the decision of the trustees who may in a given case form a wrong opinion regarding winding up of the scheme.

In view of the above, the court has pointed out that SEBI has extensive powers with respect to the regulation of mutual funds including the trustee’s decision to wind up a scheme of the mutual fund. Further, SEBI has the power to pass any direction if it deems fit in the interest of unitholders.

Therefore, a scheme cannot give unitholders preference over the creditors while paying dues. Accordingly, a scheme has to pay off its liabilities before it can start returning money to the unitholders.

Will a fiasco like Franklin Templeton mutual fund not be repeated after this landmark verdict?

Closure of an open-ended mutual fund scheme is a rare occurrence. It is unlikely we will see a repeat of the liquidity crisis that arose in the debt market due to the pandemic that led to the winding up of Franklin Templeton debt mutual fund schemes.

However, if for any reason a fund house decides to wind up a scheme/s, it may not be abrupt going forward, as we saw in the case of Franklin Templeton mutual fund schemes. Instead, we may see a collective process, wherein the unitholders will be better informed and make their decision count.

Besides, SEBI has taken various measures over the past few years to make debt schemes more transparent in its transactions. It has also introduced steps to make mutual fund houses and its key employees more accountable for their actions. The measures could start showing results going forward.

View all posts by Divya Grover

SEBI Clears DHFL’s Way to Exit MF Business! Will It Affect Your Investments?