More than a year after Franklin Templeton mutual fund (FTMF) abruptly announced closure of six of its debt schemes, market regulator SEBI has barred the fund house from launching any new debt mutual fund scheme for a period of two years.

In addition, SEBI has imposed a cumulative penalty of Rs 15 crore on the fund house, the trustee company, and some of its key employees. Among the key employees, it has imposed fine on Chief Executive Officer Mr Sanjay Sapre, Chief Investment Officer Mr Santosh Kamath, and some fund managers involved in the management of the six debt schemes as well as the Chief Compliance Officer. It has imposed penalties based on various violations of the SEBI circular, which was observed during the forensic audit.

In a separate order, SEBI fined a total penalty of Rs 7 crore on Vivek Kudva – Head of APAC distribution, his wife, and mother, and banned them from the securities market for one year. SEBI has alleged that the Kudvas sold units worth Rs 30.7 crore just before FTMF wound up the schemes in April last year. The regulator said that Vivek Kudva had been privy to information such as concerns of redemption, concentration and liquidity risk pertaining to the stress in the impugned debt schemes, most of which was not in the public domain. This constitutes to unfair trade practice in securities market.

SEBI has also directed FTMF to refund Rs 512 crore collected as investment management and advisory fees for the six debt schemes between June 2018 and April 2020. The amount will be used to repay unitholders.

The schemes of FTMF which are under process of winding up are as below:

According to SEBI, the above-mentioned points substantiate that they were running the debt schemes with a similar strategy as that of Credit Risk Funds with similar portfolio of securities.

Here is what SEBI concluded…

“The serious lapses and violations appear to be a fall out of the FTMF’s obsession to run high yield strategies without due regard from the concomitant risk dimensions. FTMF ought to have realised that the past track record in respect of high-risk strategies is no guarantee against future mishaps. For a fund house which has been in this industry in India for over two and a half decades, it is surprising that its systems to monitor and manage critical risks like liquidity, credit and concentration are less than robust. The effectiveness of these systems stand compromised in the process of the FTMF’s single minded pursuit of reaping high yield.

While it is easy to shift the blame for such mishaps onto black swan events, regulatory changes, etc., the FTMF needs to seriously introspect and put in place robust risk control and due diligence mechanisms, given that the rest of the industry has been able to cope with the events and survive through the crisis period of the COVID-19 pandemic, without reaching the point of winding up.”

FTMF to appeal with SAT

FTMF has denied any breach of SEBI regulation relating to Macaulay Duration valuation, due diligence and care. It further stated that the regulations do not mandate thresholds/caps on the exposure to AAA or to below AAA rated securities, except for two specific categories of debt schemes, i.e. Credit risk fund and corporate bond fund. Regarding investments in illiquid securities, FT stated that schemes were able to generate substantial liquidity until the unprecedented COVID-19-induced market dislocation.

It has reiterated that the decision was taken because the markets had become illiquid due to the severe impact of COVID-19 with the sole objective to safeguard value for investors. Meanwhile, as per media reports, FTMF is planning to appeal with the Securities Appellate Tribunal (SAT) against the SEBI order.

Update on repayment to unitholders

Till June 15, 2021, the six schemes under winding up have received Rs 23,140 crore from maturities, pre-payments, sales, and coupons; and Rs 17,778 crore has been distributed in 3 tranches to the unitholders. SBI Mutual Fund is overseeing the liquidation of assets and distribution of funds to unitholders.

The recent SEBI order will not impact the distribution of money and unitholders will continue to receive it as and when SBI mutual fund collects cash from the liquidation of securities.

Table: Expected timeline of payout from wound-up schemes of FTMF 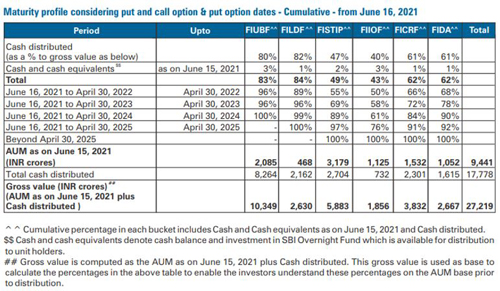 Since the FTMF debt crisis came to light, SEBI has taken various steps to make debt mutual funds scheme more transparent and compel mutual fund houses to become more accountable for their actions. It recently introduced a dynamic scheme classification concept of the Potential Risk Class (PRC) matrix for debt funds based on interest rate risk and credit risk. Read about it in detail here.

As an investor, you too should exercise caution when investing in debt funds; do not assume debt funds to be safe. It would be wise to stick to debt mutual funds where the fund manager does not chase yields by taking higher credit risk, but instead focuses on government and quasi-government securities. Ensure that you invest in debt mutual funds that align with your risk appetite, investment objective, and time horizon.

View all posts by Divya Grover

Is It The Right Time to Invest in Banking Sector Funds?