Should You Invest In PSU Funds After The Union Budget 2021?

The Union Budget 2021 has been one of the most decisive budgets of recent times. The government not only allocated more on infrastructure, healthcare, education, among other sectors but also did not burden the common man with higher direct taxes (although some relief personal income tax was expected amidst the pandemic). The focus was clearly on stimulating economic growth worry about the fiscal deficit.

The fiscal deficit target for FY22 has been set at 6.8% of GDP, which of course is high but much deserving when the country is fighting the deadly coronavirus pathogen. The government intends to walk the path the fiscal consolidation and expects fiscal deficit to be 4.5% of GDP by FY26 with a “fairly steady decline over the period”.

Here’s how the government hopes to achieve the fiscal consolidation…

First, increasing the buoyancy of tax revenue through improved compliance; and

Secondly by increased receipts from monetisation of assets (i.e. disinvestments), including Public Sector Enterprises and land

It is crucial for the government to achieve it disinvestment targets (as well as achieve its tax revenue targets) for fiscal consolidation, and avoid running higher deficits year-on-year, which could potentially jeopardise India’s fiscal stability and credit rating.

For FY22 as well the government has set an ambitious disinvestment target of Rs 1.75 lakh crore.

Other than IDBI Bank, it is proposed to privatize two public sector banks and a general insurance company.

The Union Budget 2021 has reiterated that the government does not intend to have any business beyond the strategic sectors. These sectors include Atomic Energy, Defence, Power, Telecom, Petroleum and Coal among others.

The objective of the strategic disinvestment policy as highlighted in Annexure III of the Union Budget 2021 speech is:

b) Post disinvestment, economic growth of Central Public Sector Enterprises (CPSEs)/ financial institutions through the infusion of private capital, technology and best management practices. This will contribute to economic growth and new jobs.

Now while all this sounds encouraging on paper, diluting stake from PSUs or completely privatizing some of them is going to be a challenging exercise for the government.

Over the years, the grandeur of PSUs has fallen sharply as far as their stock market performance is concerned. In FY09, the total market capitalization of PSUs as a percentage of the total market cap of public listed companies was 35.1% which fell to 9.7% in December 2020. 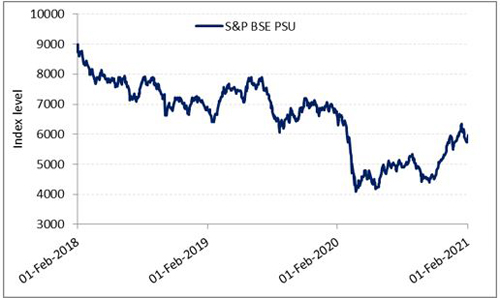 The graph above clearly depicts that, PSUs are becoming less favoured by the markets. This isn’t to say that they have become incompetent or are grappled with existential issues. But, of course, they have been subject to government regulations and governance issues. Quite a few of PSUs operate in cyclical industries which haven’t done well for the past few years thereby affecting their stock performance. Less effective methods employed by the government for divesting stake have proved detrimental for PSUs.

Lately, the government decided to change its approach towards PSU disinvestments and preferred the strategic sales route instead. But even that has not fetched desirable results so far. For instance, in the case of BPCL strategic sales, the decision to privatise was vehemently opposed by the trade unions, plus buyers were worried about several legacy issues that could potentially crop up. A few buyers were interested only in a part of the business. Now although, the government may have already identified these problems, persuading potential buyers isn’t an easy job.

As a result, the sentiment about PSU companies has been considerably weak amongst investors. Many PSUs are available at cheap valuations, but the question is should you invest.

Does it make sense to invest in PSU Funds at this juncture?

You have limited options in this space. Out of three equity-oriented PSU Funds catering to the PSU theme, one is yet to establish a three-year track record. As depicted by the table below, only one mutual fund scheme out of the three has generated positive returns on a 3-year time period.

Top-10 holdings of equity-oriented PSU funds constitute 60%-70% of their portfolios. Metals, utilities and energy sector dominate their core holdings. Over the last 2-3 months, the PSU space has performed well, which reflects in 6-month returns of S&P BSE PSU-Total Return Index (TRI), but none of the PSU Funds have gone even closer to the index returns during this timeframe.

Although 6-month performance isn’t an ideal parameter for judging a scheme’s ability; it highlights how concentrated portfolios can backfire if the stock selection isn’t apt (and some stocks not owned by a PSU Fund unexpectedly take the index returns higher).

After considering the above pros and cons, I think it investing in PSU Funds is very high-risk, which may not be worth the returns.

In the current scenario where the Union Budget 2021 has set the bulls raging and the S&P BSE Sensex is hovering over 50,000 levels, it makes sense to invest in worthy diversified equity mutual fund schemes instead, that have displayed a commendable performance track record and outperformed their respective benchmark indices.

Following ‘Core & Satellite Approach’ a strategy followed by some of the most successful investors-would help you build a robust all-weather portfolio with the best equity mutual fund schemes at a market high.

Your ‘Core’ holding may comprise around 65%-70% of your equity mutual fund portfolio and consist of a large-cap fund, multi-cap fund, and a value style fund.

Whereas, the ‘Satellite’ holdings of the portfolio can be around 30%-35% comprising of a mid-cap fund, large & mid-cap fund, and an aggressive hybrid fund.

3) Reduces the risk to your portfolio

4) Help you benefit from a variety of investment strategies

5) Allow you to create wealth cushioning the downside

6) Holds the potential to outperform the market

The core and satellite investment strategy may work for you in 2021 and beyond.

That said, enough care should be taken to select well-researched mutual fund schemes to reap the true benefits of the Core & Satellite portfolio.

Franklin Templeton Gets Consent from Investors for Winding up of Six Debt Schemes. Know the Details Here…

Should You Invest In PSU Funds After The Union Budget 2021?